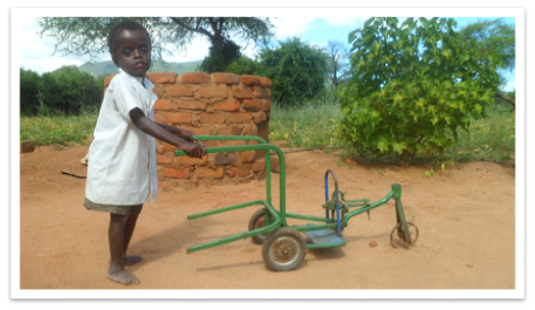 This is a photo of 10 year old Tatenda from Zimbabwe. For the first time in his life, Tatenda is able to walk on his own thanks to a walking frame built by his father Costa.

Costa created the frame using objects he found locally - an old chair frame, some wheels from local rubbish pits, and some scrap metal.

Tatenda is disabled – he is unable to walk without support and suffers from seizures and hydrocephalus - a build-up of fluid on his brain. Until recently he depended on Costa, his sole carer, to help him move around.

Since Costa started receiving support from Find Your Feet he has been able to spend less time worrying about food and more time exploring new ways to improve Tatenda’s life. This includes building him the frame. Now Tatenda can walk and play unaided, giving Costa more time to farm his land. Costa hopes that in the future, he’ll be able to make more walking frames to give other local children more freedom and independence. 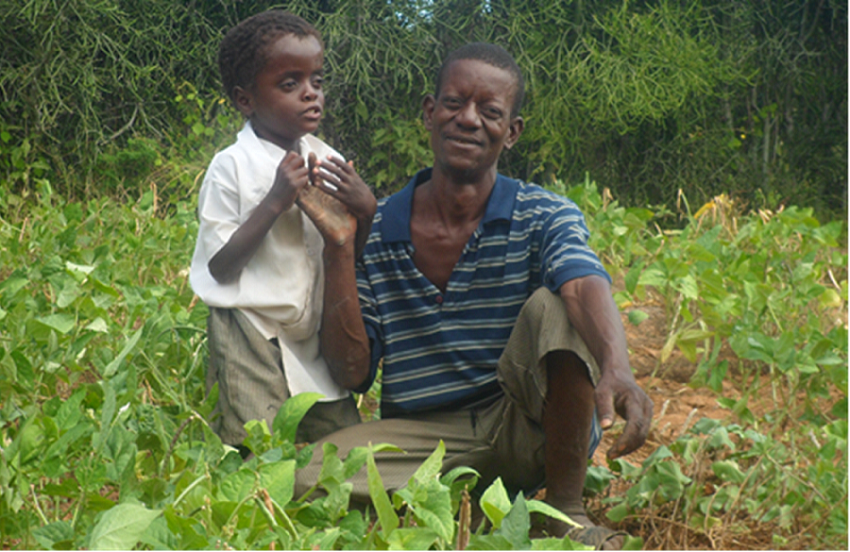 Costa had always struggled to grow enough food to feed his son.

On separating from his wife, Costa began caring for Tatenda alone. Life was very hard for both father and son. Their crops didn’t grow well, and as Tatenda needed constant care, Costa was unable to go to work.

Without the nutritious foods he needed, Tatenda was particularly vulnerable to infection and illness, and with no income, Costa could rarely afford the bus journey to take him to the nearest health centre.

Every day Costa was faced with uncertainty and worry about what might happen to his little boy.

But thanks to the support of his own community, and Find Your Feet’s community of supporters in the UK, this is no longer the case.

Find Your Feet helped Costa to join a farmer’s group lead by a local woman named Emily Chibuwe. The group teaches struggling farmers how to improve their crops.

Emily knew that Costa was in a particularly difficult situation, and lacked the support of a large family around him. And so she visited him regularly - sometimes on social visits, and sometimes to help him implement the techniques he’d learnt at the group. 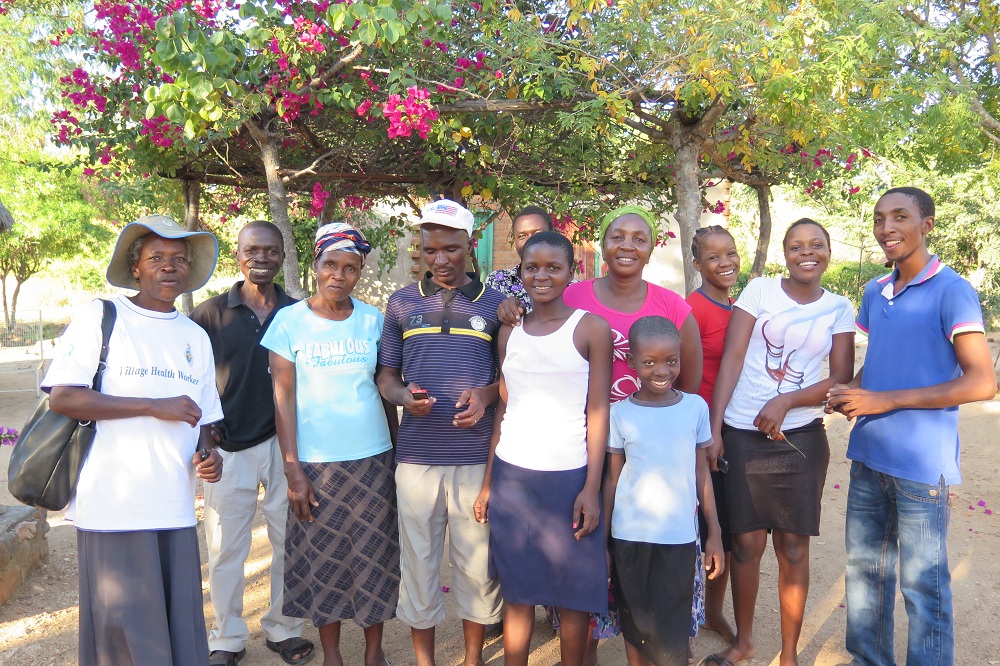 Pictured: Emily and some of her follower farmers.

As a result, Costa and Tatenda’s lives have changed.

The new techniques substantially improved Costa’s crops. He is now growing enough food for himself and his son, and even has some surplus to sell.

He learnt that watermelons are a good drought tolerant crop and can even yield better in drought years. So last season, he planted watermelons.

Although last year’s drought left millions with failed harvests, Costa had the highest yield of watermelons in the community. Many other villagers came to buy the melons from him, and even the local Headman visited to see how he had survived the drought thanks to watermelons.

Through selling his crops, he has enough money to pay the bus fare to the medical centre, and without the constant worry of providing enough food for his son, he has started exploring new ways to improve Tatenda’s life.
This allowed him time to build the walking frame, which has allowed Tatenda to walk and play unaided.

If you’d like to make a donation to support families in Zimbabwe, please donate here.

Or if you’re looking to do something a little different – why not take part in our brand new challenge Eat With Me.