Malawian Farmers are increasing their yields with innovative new techniques 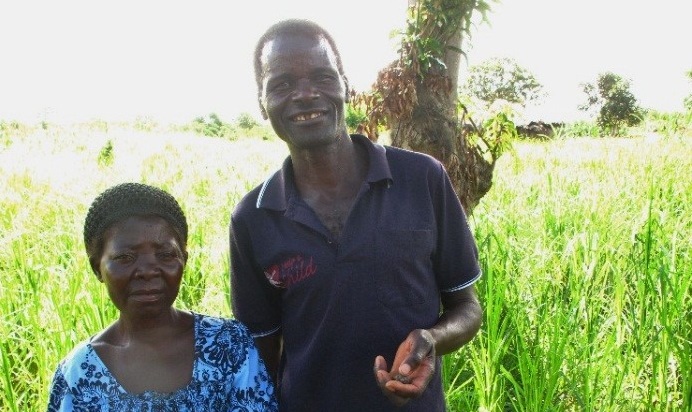 Benson and Judith Mhori have changed the way they plant seeds and increased their yield by 700%.

They live in Mzimba, a district in northern Malawi that has been badly affected by drought. The drought has resulted in failed harvests, leaving many family farmers without a source of income or food.

Thanks to support from Find Your Feet, Benson and his wife Judith have been trialing innovative new farming techniques. They have been exploring ways to protect and improve their crops.

Maize is the most popular crop in Malawi, but Benson has chosen to grow millet instead. He explains this decision:

“Millet is a good crop because it doesn’t require fertiliser and it is resistant to dry conditions. We need crops that can grow even in conditions that are very unpredictable. This new practice is a strategy to combat climate change.”

Benson has also changed the way he plants the millet. The traditional way to sow millet in Malawi is to scatter the seeds by hand. This method means that some seeds are wasted, as it is easy to sow too much, some is eaten by birds, and some dries up and dies.

Now, Benson germinates the seeds in a plant nursery, and then plants them carefully in his field in rows. He uses fewer seeds so there is less competition between seedlings. They have more space and weeding is much easier.

“This way is much less labour intensive than growing maize. Farming millet in lines is new to us and I think it works very well. I’ve only seen advantages to this method. It uses less seeds but I expect the yield to be very good as the plants look healthier.”

Benson has also been chosen by his community as a ‘Lead Farmer’. He shares his farming knowledge with a group of 19 family farmers in his area, helping them to use new techniques to improve their yield and combat hunger.

By donating to Find Your Feet, you could support farmers like Benson to continue innovating and sharing knowledge with his neighbours. Find out more about where your money goes.